An easy decision to migrate

Several years ago, TMNA found itself at a critical crossroads with its collaboration platform. The company had been running Skype for Business on a dedicated set of virtual machines on Azure. When Microsoft announced that it was phasing out those datacenters, TMNA had to decide whether to migrate the environment to the new datacenter—or move to Teams.

For TMNA, the decision was easy. As use of Skype for Business had grown, so did performance issues. At the same time, the new collaboration features in Teams were enormously appealing. “Moving to Teams made total sense from both a business and technical perspective,” says Shrini Arole, National Manager, Network & Unified Communications, TMNA.

While good for early trials, Islands mode can be a bit complicated for some users, since there is no interoperability. A user in Teams, for example, cannot message a user in Skype.

For this reason, and to simplify the migration for employees, TMNA switched to another mode for its broader rollout—Collaboration mode. In this mode, users take advantage of Skype for Business for chat, calling, and meeting capabilities while Teams is only used for collaboration—teams and channels, access to files in Microsoft 365 and Office 365, and applications. Teams communications capabilities—private chat, calling, and scheduling meetings—are off by default in this mode.

Gearing up for Teams Only

The company remained in Collaboration mode for the next 18 months, giving users a chance to work with the new collaboration features.

At the same time, the technical team worked on getting the network prepared for a full migration away from Skype for Business to Teams Only mode. One of the first assignments they tackled was upgrading meeting room equipment. “We’ve migrated all our meeting rooms to Teams Rooms systems, and we’re using Crestron Flex as the main codec device,” says Arole. In total, TMNA has 1,000 Teams Rooms set up and 300 rooms set up with Creston Flex.

The company was also interested in moving almost 10,000 employees from Enterprise Voice to Teams Phone. For this deployment, TMNA chose Direct Routing. This was important for TMNA because the company manages call flow between on-premises Cisco systems and Teams at some locations. To get this operating, the team upgraded its on-premises session border controllers (SBCs) for compatibility with the new Teams environment.

TMNA was also waiting on several Teams Phone features such as dynamic emergency calling. This feature enables a company to route emergency calls (such as 911 calls) and notify security personnel based on the current location of the Teams client. For TMNA, it was a valuable feature that was worth the wait for the safety of their employees—both in office and factory locations.

Everything was on track for a migration in the fall of 2020. And then the COVID-19 crisis struck, and plans changed dramatically. 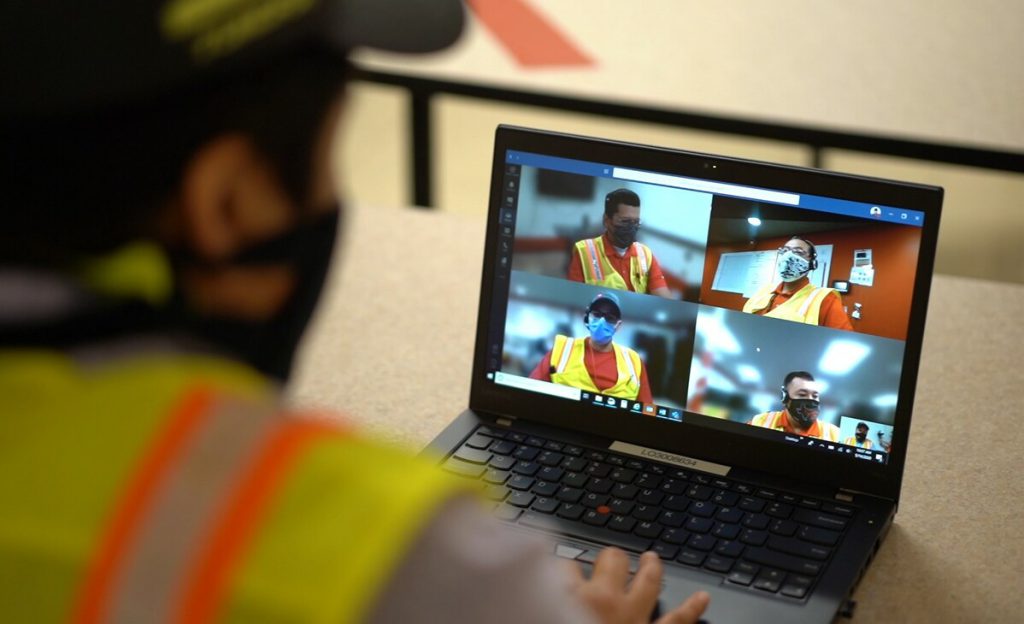 Suddenly, thousands of employees were now working remotely. This shift put enormous pressure on the Skype for Business platform. Fortunately, the team had anticipated that people might have to work offsite and, just weeks prior, they took steps to prepare the infrastructure for remote access. This preparation included VPN split tunneling. With split tunneling, critical Microsoft 365 traffic, such as Teams voice and video streams, are able to bypass the VPN, avoiding the risk of infrastructure saturation and dramatically improving performance. Data is encrypted in transit and sent to a trusted Microsoft destination, avoiding security issues while preserving performance. Plus, as Arole adds, “We use a cloud-based proxy that helps protect the clients even when they’re not on-premises.” But as traffic volumes soared, it soon became clear that more would need to be done.

To better understand the issues involved, the company relied heavily on the Microsoft Call Quality Dashboard (CQD). “We were using CQD every day, multiple times a day—especially around March, when everybody went home,” recalls Arole. “We usually see a 99.5 percent quality rating on our dashboard, and now we were seeing drops, at certain time periods, get down to the lower 90 percent range and even the upper 80 percent range.”

The team dug a bit deeper, looking at Rate My Call (RMC) scores and other anecdotal feedback. This investigation supported the metrics coming out of the CQD. “We were getting continuous reports of dropped calls and people not able to share content. And much of that was related directly to the limitation of the dedicated environment that we were in,” says Arole.

The team acted fast. “We quickly made the decision to move our original Teams deployment schedule ahead four months, from September to April,” explains Arole. The company’s earlier migration work put them in a good position to manage the accelerated timeline. As Arole points out, “The team did an amazing job preparing the infrastructure before the crisis hit.”

But would the company’s employees be ready for the change? They were already managing a major transition to remote work. TMNA was concerned about adding yet another layer of complexity.

The company had a rich library of training material online and was just about to launch onsite training events through a champions network. But now with COVID-19 restrictions in place, this plan had to be modified as well. The company quickly got its champions up to speed, moved to a virtual learning model, and then waited for user feedback.

The plan worked. Users were ready and eager to move to Teams Only mode. One reason in particular stood out: the move to Teams Only would include a superior audio conferencing and calling experience, including Teams Phone for external calls. This news couldn’t have come at a better time. “To our surprise, some of the remote locations that we had scheduled for later in the rollout plan called us to ask if they could move to Teams even sooner,” says Arole.

Into the future with Teams Only

Thousands of TMNA employees were migrated from Skype for Business to Teams over three weekends. The process was mostly automated with approximately 10,000 users migrated at a time, starting with the larger offices, then moving to smaller, regional sites.

Users experienced an immediate jump in performance—and the metrics proved it. “Teams Phone quality has been phenomenal,” says Brian Callahan, Manager of Network & Collaboration Platforms, TMNA. “Our RMC scores since implementation have consistently been 4.8 to 4.9 out of 5. With Skype for Business, we were closer to 4.1—that’s an amazing jump.” Callahan adds that he believes call scores could be even higher when they filter out remote factors like poor internet connections at home.

As TMNA continues to reap the benefits of Teams for remote work, it is also looking to get even more value from Teams when employees return to the workplace. The dynamic emergency calling feature, for example, is now in place. All meeting rooms are now Teams-ready.

There are even plans to deploy Teams to other parts of the company where Skype for Business wasn’t available. That includes old desk phone systems, which the company is planning to standardize on Microsoft Teams with Teams Phone. The company is even considering phasing out technologies like its old paging systems in favor of Teams-driven devices. “The more we can take advantage of Teams across all our communication channels, the better,” says Arole.